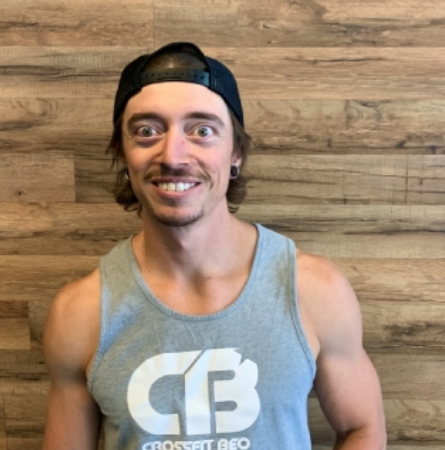 Zach discovered CrossFit in 2011. Growing up he played some recreational sports, but by the end of elementary school he was no longer involved in any organized activities. Sometime early in middle school he found what eventually became one of the earliest influences in his life, skateboarding. In this, he learned self-discipline, commitment and the joy of what hard work can bring one over time. For the better part of 10 years he not only loved, but lived skateboarding. At times he found himself distracted by different things, including substance abuse in particular, which led to far too much time on the couch. Zach then suffered a severe ankle injury requiring reconstructive surgery and while recovering vowed to use his body to the utmost of its ability once recovered.

It wasn’t until an old skateboarding friend and co-worker asked him to “come try a WOD” in his garage, that he realized what being “in shape” meant. He quickly turned all his efforts to CrossFit and purchased whatever bare bones equipment he could afford. He trained on his brother’s back porch for nearly a year and a half before convincing his girlfriend at the time (his now wife, Laura) to join their first gym, CrossFit Unbroken in Denver.

In 2014, Zach and Laura made a move to the Roaring Fork Valley and became a part of the Roaring Fork CrossFit family. After being a member of RFCF for nearly a year and a half Zach began to feel a desire to contribute what he could back to his CrossFit community. He attended a CF-L1 seminar, and shortly after received his CF-L1 trainer’s certificate on 4/23/2016. Since then he has truly enjoyed sharing with others the many great things the pursuit of fitness can bestow on one’s self!